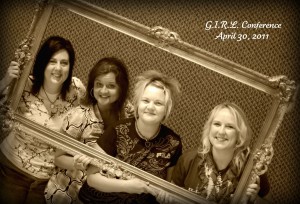 February 2006
It was during a Monday morning, mom’s Bible Study that Jennifer, Ketra, Melissa and Misty were led by God to share their story.  All four women were close friends, yet did not know they had shared the same past of teen pregnancies ending in abortion.  Little did these four friends know that God was calling them to start a 501(c)3, non-profit ministry.

At first, they thought they were supposed to give testimony at their home church and start working directly with local Youth Departments.  However, it was during a road trip to Austin that The Lord revealed His plan for these four friends.

After a long visit with Lori DeVillez, Austin Pregnancy Resource Center’s Executive Director, they stopped for dinner at PF Chang before heading back home.  During that time, they discussed all that they had learned during their visit with Lori and shared what was on their hearts.  All four friends believed God was calling them to start a Crisis Pregnancy Center.  They didn’t have a clue where to start or how to do it, but they knew in their hearts they needed to do what God was calling them to do. That evening during dinner, a handwritten commitment was signed and dated (February 3, 2006) to move forward in starting what is now known as Still Waters.

May 2007
Board of Directors hired first staff member (Executive Director).

September 2008
Abortion Recovery was introduced as a new service.

August 2011
Ignite was created/introduced as a new program for teen/young dads.

September 2013
Sexual Abuse Recovery was introduced as a new service.
Still Waters received our first invitation into a public school to educate students on sexual integrity.

August 2014
Thrive was created/introduced as a new program to our Chosen graduates and other young moms.

April 2016
Still Waters launched i am ENOUGH, a character development / sexual integrity program created for 6th – 8th grade girls and boys.  Domestic and international non-profit organizations have partnered with us in spreading the i am ENOUGH message to other students outside of Kaufman County, Texas.  Currently, i am ENOUGH is being utilized in 10 states and 6 countries.

January 2021
Still Waters moved into our very own office space.

August 2021
Piloting a new parent program called Reimagine.  This program will be designed to help parents with special needs children.

Currently
Still Waters is a multi-faceted pregnancy resource center that not only serves during times of crisis, but also in prevention and healing.  We currently have 4 staff members and 30 active volunteers who help us do the work that God has called us to do.  To Him be the glory, great things He has done!

To hear our Co-founder’s story of forgiveness, click here!